Vrindavan is a major pilgrimage center for the Hindus, located on the banks of Yamuna River about 150 km to the south of Delhi.

Tour Vrindavan a major pilgrimage for the Hindus

Vrindavan is a major pilgrimage center for the Hindus, located on the banks of Yamuna River about 150 km to the south of Delhi.

Vrindavan is a major pilgrimage center for the Hindus, located on the banks of Yamuna River about 150 km to the south of Delhi is considered one of the oldest cities in the country. Vrindavan is believed to be the city where Lord Krishna grew up.
Vrindavan has been a big center of learning and Krishna worship for a long time. With several temples all over the town, the Bankey Bihari temple is the best-known in the city. The idol here is kept hidden from view behind a curtain that is opened and closed every few minutes. Built with white marble the Jaigurudeo Temple resembles the Taj Mahal and doesn’t accept donations from non-vegetarians. Remember that entry to the temples is free but make sure you carry a little spare change for the shoe handlers.
The Brahmotsava Festival that is celebrated for 10 days after Holi in the months of February-March is one that brings in the most number of visitors. Ratha Ka Mela, which is the main day of the festival, sees a giant wooden chariot pulled by devotees bring dragged from the Rangji temple to its gardens and back.
Vrindavan is considered a sacred place and a large number of people come here to renounce worldly life permanently.

Prem Mandir
Prem Mandir (temple of love) is one of the newest temples dedicated to Lord Krishna.

Yamuna river
The Yamuna sometimes called Jamuna is the largest tributary river of the Ganges (Ganga) in northern India and it flows through the religious land of Vrindavan.

Our tours in Vrindavan 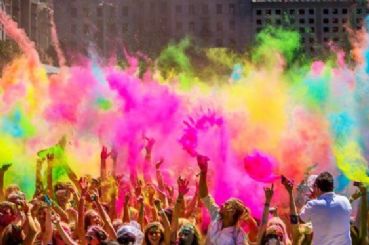 A unique experience to visit the beautiful Golden Triangle with Delhi, Agra and Taj Mahal and Jaipur visit. You can partecipate to Holi Festival 2020 celebrations in Vrindavan.

Other destinations in Uttar Pradesh