Bodhgaya is obviously the best known and most visited among the holy places linked to the main events of the life of the Buddha.

Bodhgaya is obviously the best known and most visited among the holy places linked to the main events of the life of the Buddha.

Bodhgaya is obviously the best known and most visited of the holy places linked to the main events of the life of the Buddha and is undoubtedly the most visited place for Buddhists all over the world. The history of this city is famous: after years of ascetic life in the forest, Prince Siddhartha, one step away from death, reconsiders his spiritual journey and after accepting a bowl of rice from a young woman sits under a Pipal tree and swears to himself not to get up until he has achieved enlightenment. So he became the Buddha, and the tree from that moment was called the Bodhi Tree. The following week he passed by meditating at various points near the tree and then left for Sarnath where he gave his first speech.
Bodhgaya is located in one of the poorest areas of India, in the state of Bihar which is considered one of the most dangerous for travelers, although in recent years the situation has improved somewhat.

Mahabodhi Temple
The Mahabodhi Temple serves to be the main and most important attraction in Bodh Gaya. It was built in the 7th century, surrounding the Bodhi Tree that Buddha sat under whilst he attained enlightenment.

Great Lord Buddha statue
This statue of Lord Buddha is the tallest in India and was instated by the XIV Dalai Lama in 1989. It is a meditating Buddha resting on a giant lotus, constructed using intricately carved sandstone and red granite.

Bodhi Tree
Bodhi Tree is the tree that Lord Buddha meditated under before he could attain enlightenment. The original Bodhi tree may have been destroyed by many Kings, but the direct descendants flourish even today standing tall at 80 feet.

Thai monastery
Well known for its curved roof covered with exquisite tiles of gold, the Thai Monastery houses a bronze statue of Buddha and another recently erected 25m high statue in the garden.

Our tours in Bodh Gaya 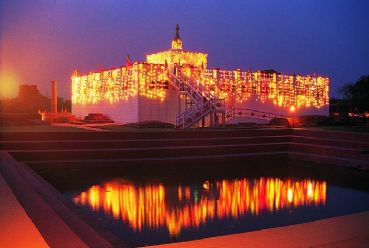 Special tour to discover the most important sites of Buddhism in India with visits to the cities of Delhi, Agra, Lucknow, Lumbini, Kushinagar, Bodh Gaya and Varanasi.